Four types of adaptations are available:

– Administrative adaptation
This involves manual addition to or subtraction from the balance. The reason will be shown in the last column.
– Leave entitlement
This is the balance given at the beginning of the year from the employment, or when a contractual change has occurred.
– Carry over balance
This involves transfer of positive or negative left-over balance of the previous year.
– Expired transport adaptation:
This can only occur when the 2012 legislation on leave is selected as the calculation method. A deduction adaptation will be made because the leave has expired.

Perform adaptation on balance/transfer left-over balance of the previous year.
There are many reasons for performing an adaptation on the balance, such as paying leave days to you employees, issuing rewards for not being ill all year, or making a correction.

Two types of adaptations can be used: individual and collective adaptations.

An individual adaptation is performed as follows:
Go to ‘administration’ | ‘employee balance summary’, and select the employee whose balance needs to be changed. Then, click the type of leave of which the balance has to be changed. In the top left corner, select ‘new adaptation’ 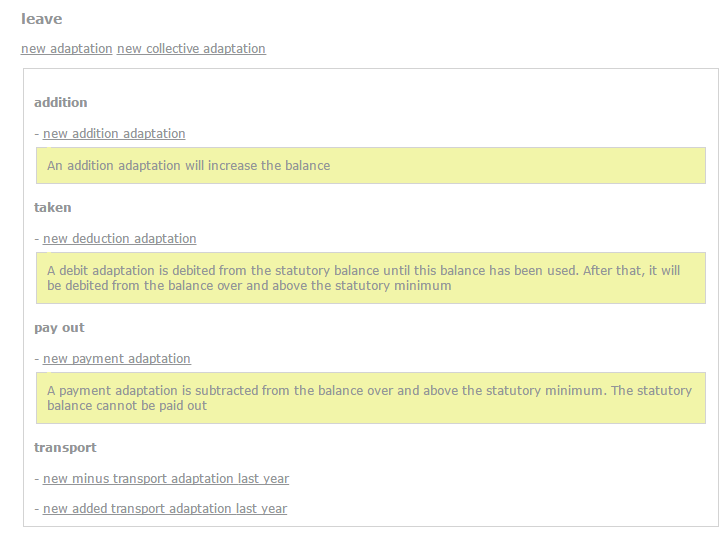 Then, select the type of adaptation needed.

The balance added here can be found in the annual leave summary. It can be found under ‘manual additions’. This balance will always remain exceeding statutory.

With this function, you can pay out your employee’s leave days. It is not possible to pay more than the amount of exceeding statutory leave, unless the employee’s employment has been ended.

This should only be used when you are using the Leavedays system for the first time, or when an employee enters employment and takes leave days with him/her. Fill in the number of hours or days, and add a reason. Then, click save to perform the adaptation.

Again, the positive transport of last year is only used when initializing the system, or when an employee enters employment and takes leave days with him/her. At ‘number of hours’, fill in the total number of hours to be entered. Then, it is possible to divide the hours over the different spaces in which the hours can be filled in. These spaces coincide with the year balance summary.

Example
In this example, an employee has 35 hours left, of which: 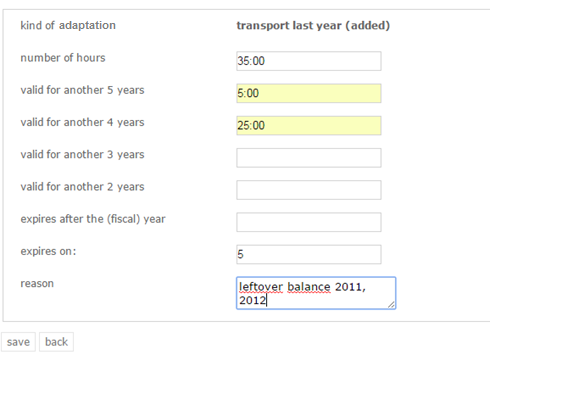 In the space next to reason, add a reason for this addition, so that the employee knows why this adaptation has been performed. Save the adaptation and the balance will be divided over the different types of acquired balance.